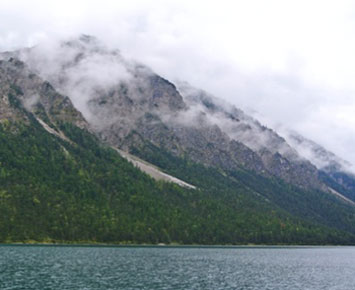 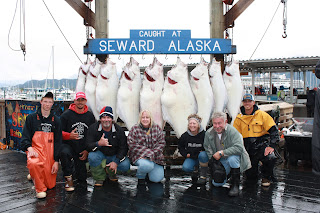 The sky was gray and weather was calling for 20kt of wind from the East.  As we approached Cape Resurrection the weather seemed to be in our favor.  The seas were a bit confused but the wind was only blowing about 9kt in the easterly direction.  As we approached Bainbridge Passage the wind kicked up a bit, but we kept on.  We approached the Island of Montague and the winds seemed to lay down and seas were calm.  We fished in 90′ of water in a spot that I’ve done especially well in the past.  Within 30 minutes of dropping the anchor we starting getting take downs on the jigs.  As the day progressed the fish kept coming, and not only was the bite increasing; so was the size of the fish.  The largest fish weighing in at #111lbs decided to bite Mariam’s half chunk of herring just about pulling her over the side as she yelled “fish on.”  Two other fish in the same size range were caught off the stern by Scott and his wife both on light tackle.  It was a killer day on the water and the fish just kept biting.  By 1pm we had already caught 52 halibut, releasing most of the small and keeping an assortment of 50lb- 100lb fish.  Everyone on the boat was ecstatic as fish were being railed constantly and gun smoke fillled the air.  The weather became increasingly windy and rough as the day went on but the killer fishing kept everyone’s attention solely on the fish.  The crew decided that it would be a good day to hang some fish at the dock so our fisherman could show off their prizes.  What a fantastic day. The fishing is picking up and the season is about to go into full swing… Perfect timing!!

Thanks everyone for coming out, we had a great time fishing with you and hope that you will all be back with us soon.  FISH ON!!!