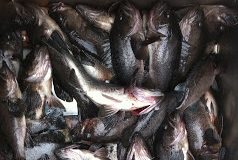 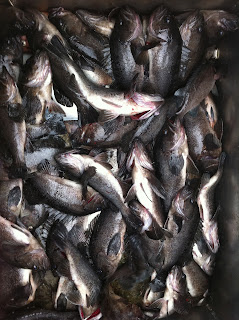 Today was a ‘friends and family’ trip, our target species were Halibut and Rock fish.  The weather report in the morning was a NE 20 and 6′.  Not a desirable forecast for 9 children under the age of twelve.  Our plan was to stay close and catch our Halibut and run.  We went about half way to the Halibut grounds and dropped the pick on a rock pile.  We were savaged by Silver Grey Rock fish immediately, and had a limit of non-pelagic rock fish within an hour.  The weather seemed to be a steady 15kt of wind so we decided to make the run another hour to the Halibut grounds.

Turned out to be a good call, Miles chummed in the fish in a matter of minutes and we were able to catch a boat limit of nice halibut within 1 1/2 hours.  The kids had a great time, especially with the new gear we purchased this year.  Our new 2 speed reels made it possible for even the youngest kids to reel in Halibut on their own.  Everyone was still fired up at that point so we figured we would try for a boat load of black bass as well.  Everyone is allowed a total of 4 rock fish and they all had 1 non-pelagic leaving 3 pelagic(black bass) left to catch per person.

We motored back towards Seward another hour and dropped anchor in one of our glorified Black Bass spots.  Instantly the kids were screaming fish on and the adults were asking what it is they’re doing wrong;) kids always seem to have the knack for hooking the bass.  9 year old Lauren from Anchorage thought she was hooked on the bottom, I told her to hold on and I’d be there in a minute.  I ran over to unhook the rod off the bottom when I saw the big head shake.  I grabbed the rod to keep in from getting yanked overboard and as soon as I grabbed it the fish took off.  Pulled about 100′ of line prior to getting wrapped around the prop and breaking free.  I told her that she now has a “one that got away” story.  Probably better that we lost it rather than pulling in a fish 7 times her size, beating it to a bloody pulp, and shooting it in front of a crowd of small and screaming children. 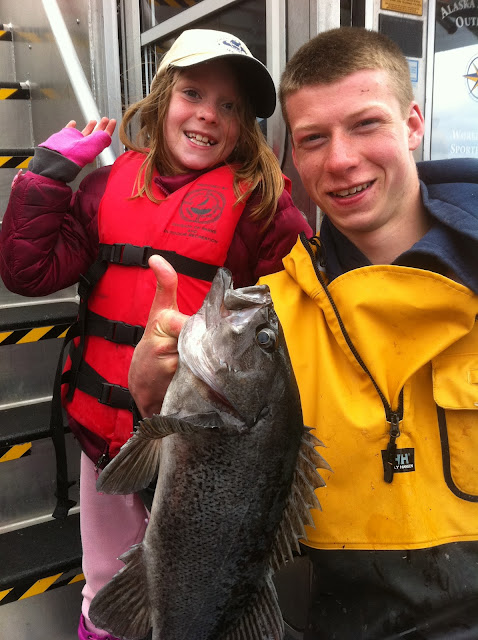 Great trip guys- Miles and I had a blast! FISH ON!!!