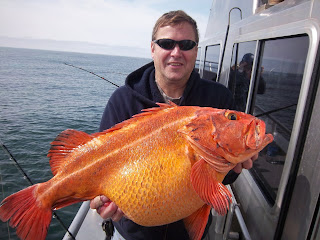 Today’s trip was a light load for the Sea Quest, with only 14 fisherman.  The morning halibut bite was great all morning and we limited on halibut by 10:30am.  The next target species on the list was Ling Cod, So we drifted some twin-tail jigs and were able to catch some really nice ling cod.  We had five fish on at all times, and the majority weighing around 30+ pounds,  The silvers however were not as easy to find.  We tried three spots picking up a few salmon at each.  We made a final move to an area that produced two days ago prior, and within 10 minutes we had already landed 10 fish.  The bite remained constant until we threw our 42nd silver in the box.  Another 3 species grand slam for the Sea Quest.  The fishing and the weather have been phenomenal this summer, and the fishing season is in full force.  Thanks again for coming out guys, what a catch!!! See you next time. FISH ON!!!