We kicked off the season this week with the Combat Fishing Tournament.  A donated trip to our military members who have either been deployed or are soon to be.  The tournament was a little different this year than in years past.  No longer was the prize for largest fish, it is now mystery fish takes the gold.  The winning weight would be drawn out of a hat. 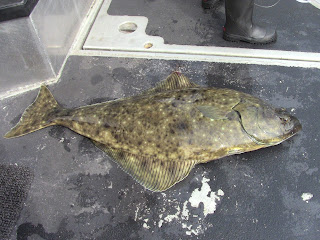 We were hoping to catch a hog or two in the morning but the bite was extremely slow.  However we did hook up three monsters which were all lost within seconds of hook set.  The first screamer we hooked bit the 8oz white jig and pulled ferociously until the jig ripped right through his lip.  Bummer, but it’s hard to keep the big ones on with the jig because of the massive head shake they produce in the initial bite.  After about ten minutes on the opposite side of the boat we hooked another fatty, this fish pinned Mouthy to the rail while screaming out line.  The Halibut slammed his rod against the rail causing the 250lb mono to snap instantly.  Another devastating blow but we have all season to get those pigs back.
After sitting for 2.5 hours we decided it was probably time to do a little more catching than fishing.  We cruised over to a spot not far from and landed a boat load of 15lb-35lb halibut.  Took a bit to get the bite going but after they located the bait it was fish on all over.  Always a great way to end the day!.  We were also accompanied by Anchorages Channel 11 news team.  They covered the whole day of fishing and were able to hook a limit for themselves as well.  The story should be showing sometime mid-week.
Thanks again guys for what you do for our country, I’m glad we were able to show our appreciation by taking you all out fishing again.  See you next year!  FISH ON!!!
Back to Blogs