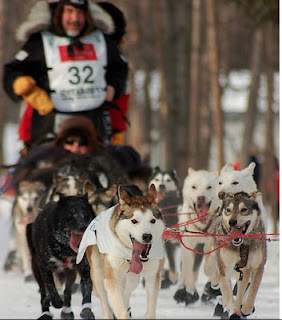 Scott Janssen and his family have been fishing with me since 2006.  They are still great friends of ours and despite their busy schedule, they still manage to get away from the office every year to take their employees of Janssen Funeral homes on a fishing trip out of Seward.  Scott has always been into dog mushing but got serious about it in 2011, running his first Iditarod.  The Iditarod is known as “The last great race,” and is a sled dog race starting in Willow and ending in Nome for a total of 1,049 miles.   It’s not only an honor to know such an athlete but Angela and I have had the privilege of of being his dog handlers for the past two years.


This being Scott’s second year he felt more comfortable with the trail and his team of dogs.  Scott ran a very consistent race staying between 37th and 42nd place.  Scott Janssen and his fellow mushers may be the ones talking to the press at the end of the Iditarod but the true stars are the dogs. When Janssen’s 9-year-old husky collapsed while heading down a hill in Dalzell Gorge, Alaska, the Iditarod sophomore knew that there was only one thing that he could do.
Janssen said:

“Boom! Laid right down. It was like a guy my age having a heart attack… I know what death looks like, and he was gone. Nobody home.”

Janssen, who is mushing in his second Iditarod (he finished 42nd out of 47th last year) could have cut his dog Marshall loose in order to try and keep pace with the rest of the group, but Janssen couldn’t leave his dog dead in the snow.
Janssen said:

“I was sobbing… I really love that dog.”

The Post Game reports that Janssen stopped and gave the dog CPR. He was eventually able to revive Marshall. Janssen said:

“I had my mouth over his nose, breathing into his nose I was compressing and rubbing his chest, trying to work the air out. I’m like, ‘C’mon dude, please come back… and he did.”

Janssen put his dog in the sled and rode the rest of the way to the next checkpoint and brought him to the veterinarian. Janssen’s daughter, Chelsea said:

“The vets took a look. Gave Marshall an IV, and he’s heading home. He’s doing just fine. He’s still at the checkpoint and they’re flying him back home today.”
Great Job Scotty!!!  I think you earned A free fishing trip