After fishing in Wyoming we jumped on a plane to Panama City.  We took off for the villa we would be staying in for the first two weeks on Perico Island, just outside Panama city.  From there we were able to access various fisheries in the area. Our first trip was with Rich from Panama Canal Fishing.  We entered the Panama Canal and worked our way into Lake Gatun.  Lake Gatun is known for excellent Tarpon, Snook and Peacock Bass fishing.    We were warned that the Tarpon fishing was going to be slow but Matty and I still wanted to give it a shot.  We saw 2 Tarpon but they would not take to the fly.  In the afternoon we trolled around the lake trying to hook a Snook.  Matty hooked one up but the fish immediatly spit the Rapala lure.  Slow start to the day but the sights were amazing and our guide Rich was extremely knowledgeable about the area as well as the history of the Panama Canal.

In the afternoon, Rich routed us to one of his well known Peacock Bass areas where we found great success. We hooked and retained at least 30 1-3lbs bass.   We used 5-7 weight fly rods equipped with small top-water poppers.  It was a great trip, we both had always wanted to catch a peacock bass and we did…a whole lot of them.

After fishing the canal, Rich introduced us to one of his good friends; Jim Dertien.  Jim is also a local, an   American at birth who relocated to Panama in the late ’60s.  Jim has a 62′ yacht called “The Cheers,” which he uses primarily to run charters out of Panama City and around the Gulf for Tuna, Sailfish and Marlin.  Jim took all 12 of us out on his boat for a great day of fishing.  The weather was perfect and the fishing was pretty hot.  We caught 5 nice 30lb tuna and 1 Bluefin Jack.

We quickly learned that Jim is an amazing guy, he pilots 100′ to 1200′ ships through the Panama Canal.  Jim informed us that the canal’s daily revenue is between 4 and 12 million dollars a day and his job of piloting submarines through the canal is impressive.   Jim continued to show us a great time by inviting the crew to his great beach house 90 Kilometers away from the city.  We surfed and relaxed for a few days on a secluded beach. 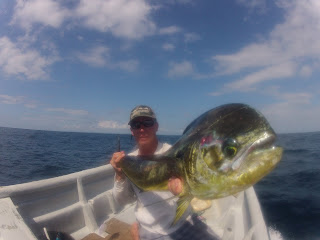 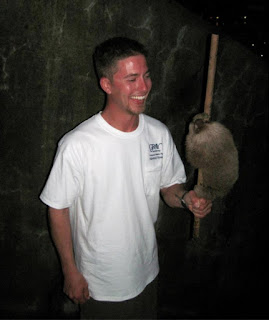 Matty and I were both getting the itch to fish so we departed Casa Del Jim and headed to a small local fishing village called Pedasi.  Pedasi is an undeveloped area that has access to the Tuna Coast.  Against everything I have ever learned about the ocean, we decided to trust a non-english speaking commercial fisherman with our lives as he took us on his 22′ open panga 28 miles off shore.  We were a little uneasy about the idea at first but Matty and I prepared for at least a week at sea by packing 16 sandwiches and 6 gallons of water.  I figured if we were dumb enough to get ourselves into this situation we should at least be prepared for the worst. 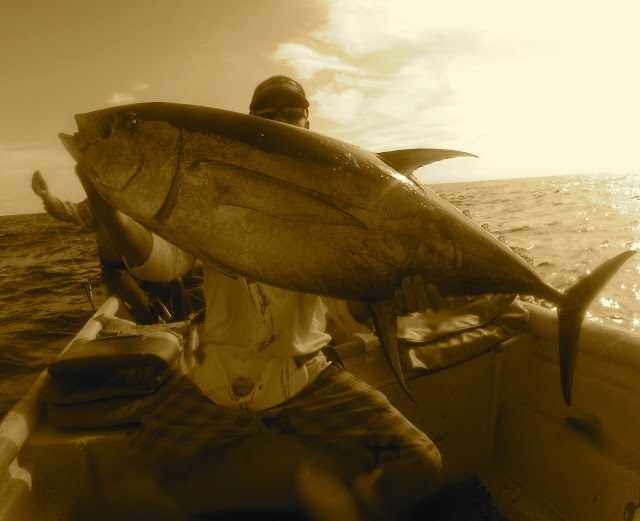 In just two days of fishing out of the panga, we hooked up on 12 Dorado; 1 of which I hooked on a fly
rod, and 5 nice Yellow Fin Tuna.  Great trip so far, and it’s not over yet. 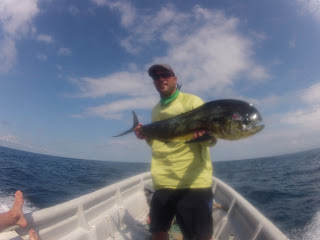 Matty with his first Dorado