FR Bell out of Anchorage chartered the whole boat today for a full day halibut trip.  We had tried out deep the day before and had no luck, so today we ran inshore.  I dropped anchor on top of a massive school of bait and within minutes had already hooked a 20lb King Salmon.  A good portion of the boat had entered in the “Seward Halibut Derby,” so we immediately used the King’s head as bait for halibut.  I have been extremely successful in the past with King Salmon heads.  In 2009, we caught a 305lb Halibut on a fresh king head, and since then… “off with their head!”

We arrived during the tail end of the flood and our first spot was producing a nice 25lb- 75lb halibut average.  As the tide slowed down and switched to Ebb, our bite died so I figured we would run 2 miles NE to one of my Ebb spots on the rocks.  To my surprise nobody was home but a few flapper Halibut.  We did, however, hook into some really nice Lingcod.  And as Lingcod season does not open until July 1st, they all had to be relesed. We still have room on a few of our Halibut/ Lingcod Combos in July if anyone wants a chance at keeping one of these bucket mouths. 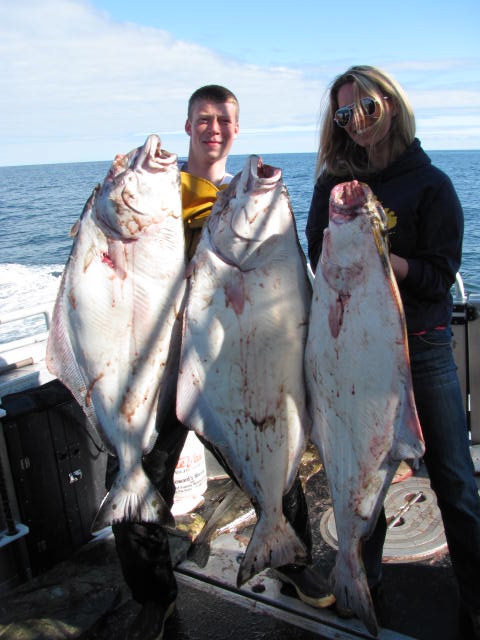 Overall it was a great day of fishing with plenty of action all day.  By 3pm we slid off to the flats and filled the boat with some above average halibut.  We fished just off the numbers for the chicken hole and the fish seemed to be getting bigger by the minute, some around 30lb range.  In the past few years the state average has dropped from 22lb to 15.6lb, so anything over 20lb is considered a pretty nice fish.  Great day of fishing guys, thanks for coming back out with us this year.  See you next spring! FISH ON!!! 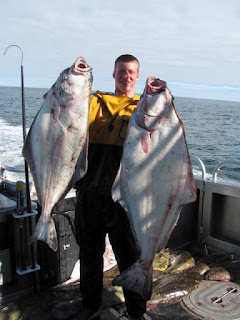