Nothing but blue skies over the fishing grounds today. Again the weather got increasingly better as the day went on, there was no wind and it was hot.  Fist spot today was pretty unsuccessful, we had only caughta 2 halibut at 25-30lbs. Did however pick up a couple big lings while soaking big baits for hogs.     We had a split tide causing the water to go slack during the middle of the day.  Halibut are tougher to catch when there is no water moving with the tide.  I waited until the tide was just switching to an outgoing and sure enough we landed some nice fish.  Our biggest was caught in a single chunk of herring and she tipped the scale at the dock at 150lbs.  Another big one shortly after weighing in at a little under 90lbs.

Today was a single species halibut trip.  These are my favorite because big fish structure requires long soak times in order to get them to bite.   The sharks were in thick at the halibut grounds but we were able to fish through them and pull off a nice load of halibut.  Killer weather and fishing, always nice to have them both at the same time.  FISH ON! 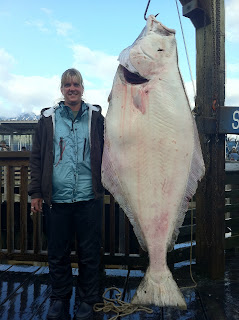