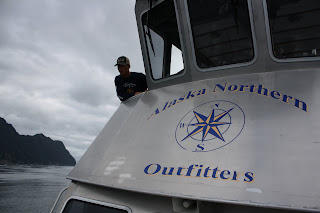 CMI of Anchorage came out on a company trip today with 31 eager fishermen.  Our fist target species was halibut.  We found an offshore rock pile that I haven’t tried in the past and decided to give it a shot.  It was 250′ deep and very fishy looking on the sounder.  Within minutes of getting our gear down to the bottom, there were dogfish (sharks) on every line.  We quickly pulled anchor before losing a bunch of gear (due to their abrasive skin) and moved to a nearby spot in about 220′ of water.  The boat was limited with halibut by 2:45, so we still had some time on the clock to try for some silver salmon.  The bite at the salmon grounds was slow at first, but as soon as the fog finally cleared and the sun hit the bait, the bite was on.  We were getting double and triple hookups at a time.  One client reeled in a line that had snapped from another boat, and attached was a 12lb silver still hooked.  As I hand lined the fish in, I could feel there was still some weight on the other end.  Come to find out, the fish must have hit so hard that it ripped the rod out of someones hand and had been swimming around all day dragging a brand new salmon rod!  I would have to say that was the catch of the day.

We had a blast with the guys from CMI, they kept us laughing all day.  Thanks for bringing such a great group of guys.  We’ll be looking forward to next year company trip.  FISH ON!!!