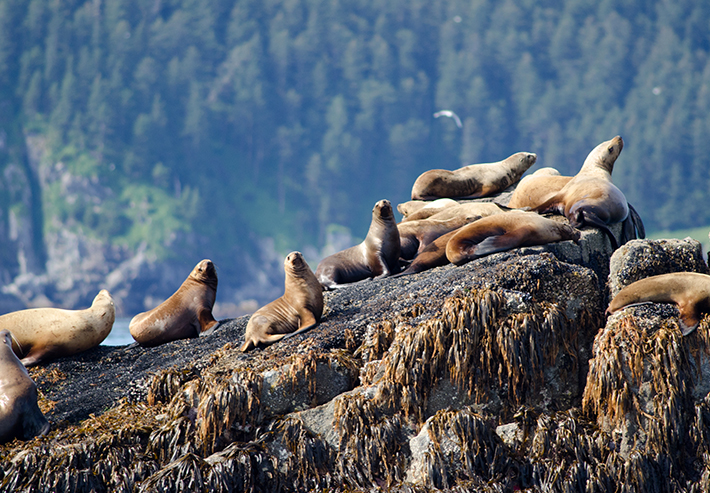 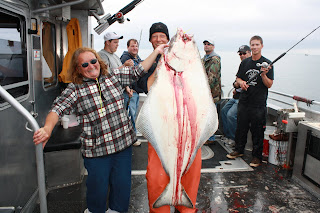 Today’s trip was the first full day halibut trip that we’ve had in a while.   The crew and I love to sit for big fish, so this was a treat for us as well.  We loaded up the night before with salmon carcasses and brand new jig tails.  We drove to a spot where I have caught 5 fish all over 200lbs over the past few years.  I also landed the biggest barn door I have ever caught there weighing in at 305lbs.  I had high expectations for this particular spot.  The first hour and a half was very slow, only hooking up with 1 fish that appeared to be around 75lbs.  The fish was hooked on a jig, but managed to tangle around two other ladys’ lines and shaking free at the surface.  Not really my favorite way to start a day of hog hunting.  The bite became increasingly steady and we did land two other fish around 75lbs.  Mariam who caught the biggest fish on the boat on a previous trip was able to hook her 75 pounder on a Metzler rig while getting sick at the same time.  Not many people are able to puke and fish simultaneously but Mariam is a rare breed; she loves to fish!

We had multiple big fish hookups but the fisherman lacked the patience to let the fish really take the bait down the hatch.  It is very important while fishing salmon carcasses to let the fish really bury the bait and take at least 10 feet of line before setting the hook.  The 305lb halibut we hooked years back took over half an hour of chewing on the head before we could convince her to take the hook.  If you would like to catch big fish don’t jerk the bait out of their mouth, IT’S THAT EASY.  Anyways, it was a great day and everyone was happy with the load considering we landed 15 big Ling Cod.  The weather was great all day with flat seas and a little sunshine.  It rained the entire way home making Miles extremely thrilled that the boat was semi-clean when it hit the dock.

Thanks for coming out guys, FISH ON!!!