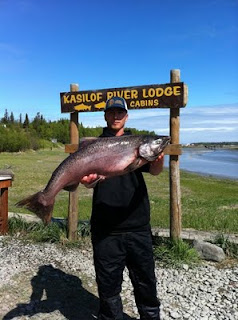 The day was slow on the docks so the crew decided that we should go to the Kasilof River to try our hand at some early season King Salmon fishing.  Keoni and I had gone last week, but the fishing was a bit slow. We did, however, catch a nice Sockeye.  The first run of the year on the Kasilof usually produces quite a few fish and being one of the first drift boats on the river for the day really pays off when there is competition.

We hit the river at 3:45am and for once it wasn’t below freezing.  We used spin and glows rigged with cured salmon roe. A very effective and popular style of fishing for the Kings.  There seems to be mixed reviews on whether the kings actually eat the bait or attack it out of aggression.  Either way the setup is a deadly combo.  Over the course of the day we hooked 8 nice Kings, unfortunately we only landed two.  One fish weighing in at #15lbs and the other just over #30lbs.

When the big King took the bait, I set the hook into the fish hard as she rolled immediately.  Unfortunately, I had already lost two fish because of the same roll.  I quickly realized that if I could control the fish during the initial spin, then my chance at landing it would increase immensely.  I have been trying for the past five years to land a king worthy of hanging on my dad’s fireplace mantle, and wasn’t about to let this one go.  I have to thank my friend and guide Pat Lewallen at Drifters Lodge in Cooper Landing for putting me on the fish this week.  Pat and his brother Matty have been my fishing buddies since the summer I moved to Alaska.  We’ve killed many species of fish together over the past 7 years but I had yet to kill a King.  After floating this river countless times and devoting the hours, energy, not to mention money, I have finally obtained the self satisfaction I’ve been looking for. With a limit of Kings…not too bad for June 2nd.
Drifters Lodge in Cooper Landing is offering King Salmon Fishing Trips down the Kasilof River until July 30.  The King trips are $125 per person and the boats have been doing great landing on average between 2 and 7 Kings a day.  Matty, Pat, Jefferson, and Jason are all great guides with lots of experience and enthusiasm, but overall, just fun guys to be around.  The night before our trip we stayed at their lodge located on the Kenai River.  They have seven cozy Alaskan style cabins with a sauna placed over the river.  Thanks again guys for a great trip. FISH ON!!!
Kenai River Drifters Lodge
Phone 1-907-595-5555
Toll Free – 1-866-595-5959