Welcome back to another season fishing with Alaska Northern Outfitters.  We slapped some new deck paint on the Sea Quest, painted the engines and outfitted the boat with all new gear for the 2015 summer.  The boat is running great and the fish have been biting.

Our first trip was the Combat Tournament.  Armed service members from all over the state got to try their hand at catching their limit of plump Halibut on our May 20th trip.  There are many prizes and giveaways for those who caught the largest Halibut to those who did not catch at all.  It’s a great event that we’ve participated in for as long as I remember.

The morning of the tournament started with a shotgun start out of the Seward harbor.  We motored out into Prince William Sound about fifty-five miles from Seward.  It was a slow start as expected, as we were waiting on the tide to start flowing.  After about an hour of waiting and chumming, the fish started to appear one by one.  The fish coming up were of nice size ranging from 35 lbs to the largest at about 76 lbs.  The fish seemed to have no preference as to what type of bait to bite, as we got equal amounts of fish on bait as we did jigging.  By the afternoon we ventured out into deeper water where we were able to limit the boat with some smaller ones.

At the dock the fisherman all weighed 1 fish each to enter into the derby.  After weigh in was the banquet where all the armed service men and women had a nice dinner and award ceremony.

Lots of hungry fish and happy fisherman! It was a great beginning to another productive Seward fishing season.  We look forward to fishing with you all again this upcoming season.  Thank you for your service and dedication to our country. FISH ON! 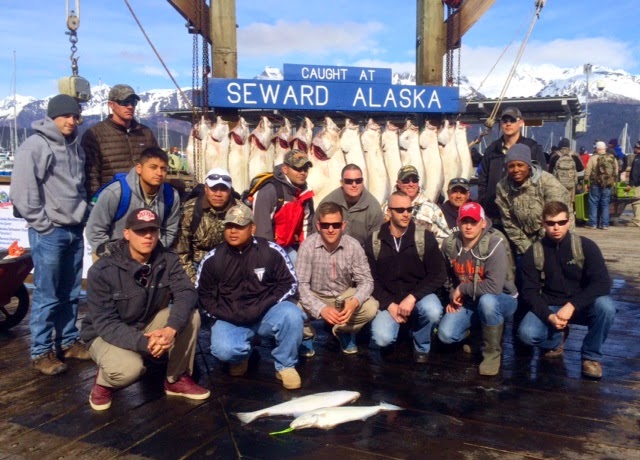