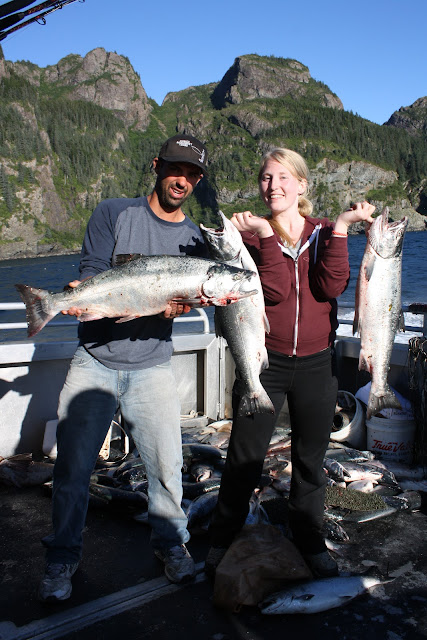 We had a group of 26 fishermen on board for a halibut/salmon combo trip.  The weather was absolutely perfect with no wind and sun from the moment we left the dock.  We decided we would target halibut first, stopping at a spot that I don’t usually fish on the ebb tide.  Two nice halibut were brought up weighing in around 50lbs each.  After about two hours we pulled anchor and dropped offshore to fill the boat with a quick bite.  The fish weren’t finding the hook.  It took until 4:30 to catch our last halibut; a lot longer than I was expecting.  The fish were there but a finicky bite can prolong the process of filling the boat.  We had a great time and the average size was a healthy 20lbs. 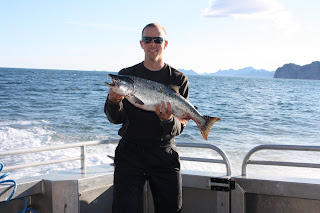 It was a one stop shop for our salmon today.  I have not yet fished this area this summer but it has produced some serious numbers in the past for silvers and halibut.  Driving over to the grounds we saw four large humpback whales all bubble feeding.  The whales lunged at the surface scooping as much food as possible into their giant mouths.  After getting everyone to finally put down the camera’s and grab a fishing rod instead, we dropped down and instantly…FISH.  We were hooking up all over the boat, up to 8 salmon on at once. We threw our 84th salmon in the box by 6:30 and called it a day.  We fished hard all day and worked for every ounce of meat in the box.  Everybody was very patient with the slow halibut fishing and were later rewarded with a savage top water salmon bite. 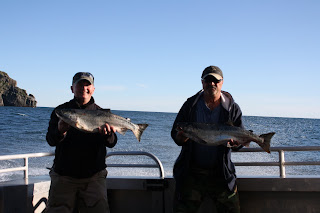 Good job, guys and nice work! FISH ON!!!
Back to Blogs