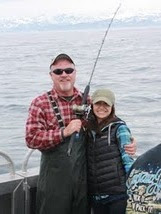 A slow start this morning for the Sea Quest.  Our first drop was in 60′ of water with a large flood tide starting late this morning.  It was tough to keep the weights on the bottom but as the tide slowed down we hooked two 45lbs halibut on the Jigs.  At 12pm we made our second move to a rock pile 4 miles off shore in search of some larger halibut.  It was a slow pick at the fish but we managed to put a few nice ones in the box.  The two salmon carcass rigs off the stern both had two big take downs, but each fish stubbornly shook free.  It’s always frustrating losing big fish but the challenge is what makes this sport so much fun.
By 3pm we made our last move to the flats, the Spiny Dogfish were thick but after an hour they thinned out and we caught the boat’s limit of halibut.  All together a great day of fishing on a glassy ocean.  The small craft advisory issued by NOAA was called off by morning.  It looks like variable 10kt winds all week, lots of rain but that won’t stop us from having a great day.

I look forward to tomorrow’s trip, I’ll see you in the morning. FISH ON!!! 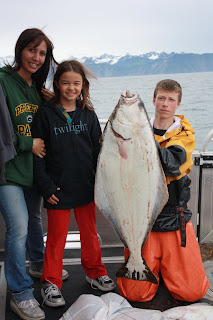